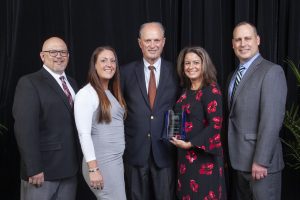 Presented as part of its awards honors segment at their April 25 Annual Event hosted at The Pullo Center, the Manufacturers’ Association’s 113th gathering set the backdrop to publicly recognize and honor member companies and partners who made a difference in the regional economy, the lives of their employees, their communities, and the local manufacturing sector during the 2018 calendar year.

The Manufacturing Trailblazer Award recognizes the historic role of an individual’s contributions to manufacturing. What begins our manufacturing ‘Hall of Fame’ helps remind us of our heritage and of those who built the region’s economy through our most important industry – manufacturing.

This year we are pleased to recognize the late Mr. Louis Appell, Jr. as our first Manufacturing Trailblazer. Mr. Appell was best known as the President of the Susquehanna Pfaltzgraff Company, a fifth generation family pottery manufacturing company in founded York County – dating back to 1811. He took over his family’s business just four years after graduating from college, when his father died unexpectedly.

Headquartered in York, he built the business into a large conglomerate that, at one time, generated annual revenues estimated to run between $250 million and $300 million a year and employed thousands in the region.

Leading the company, he created a national brand, and Pfaltzgraff became the largest producer of dinnerware in the country. He served as President of the Manufacturers’ Association in 1976 and in 2004 Pfaltzgraff was recognized as the Association’s Manufacturer of the Year.

Mr. Appell passed in 2016, but his legacy lives on through his generous community investments that are recognized throughout York County.  His generosity continues through the Powdermill Foundation. He is recognized for the Appell Center for the Arts, the Susquehanna Office Center, and the expansion of York College.

The York Daily Record has said – “If we had to single out the most influential York Countian, it would be Mr. Appell,” … “His charitable contributions could fill a book, and his influence as a businessman is legendary.”

Honored as Manufacturer of the Year: Turkey Hill Dairy

In business for 88 years, Conestoga, PA-based Turkey Hill Dairy recently became the first in its industry to become nearly 100% powered by renewable energy. The 800-employee company leads the industry in other ways as well – becoming earlier adopters in new food safety programs, saving over a one million dollars through its continuous improvement programs, and investing heavily in their workforce with employee training and leadership development.

Remarkably, the Turkey Hill Dairy has never had a year that sales have decreased, and in February the Dairy announced national brand status and now covers the entire U.S.

New Standard Corporation in York, PA has long been engaged in their community – from offering their facilities for training programs, to providing internships and job shadowing opportunities to area students to spark their interest in manufacturing careers.

Their mission statement includes “improving the quality of our lives” which translates into giving to others with organizations like the United Way, Junior Achievement, sponsoring programs and fund raisers and participating in local non-profit boards.

New Standard has also long invested in their employee development through their apprenticeship program with the Manufacturers’ Association for many years.

New Standard has also been part of partnerships to support consortia training initiatives among groups of manufacturers and is a founding member of the recently formed Southcentral PA Next Gen Manufacturing Industry Partnership which is focused on growing the regional manufacturing industry.

The Manufacturing Innovator Award is presented to the company that demonstrates its commitment to innovation, new process or product development, and the use of technology to improve the company’s competitiveness and growth.

Maculogix of Harrisburg, PA was recognized for its research and development investment and innovative product design. The company, founded as a start-up 10 years ago and located in Dauphin County, develops and manufactures diagnostic equipment to detect Age Related Macular Degeneration – the leading cause of adult blindness in the US.

The device’s measurements enable eye care professionals to diagnose the condition at least 3 years before it is clinically evident –  to allow for more effective treatment of the patient.

This past year Maculogix invested $3 million in R&D and secured an additional $38.7 million in new investment to help expand the company infrastructure and to grow the team – which has expanded from 12 to 65 employees in the past three years.

Honored as Association Partner of the Year: York County Alliance for Learning (YCAL)

The Association Partner of the Year Award this year recognizes the York County Alliance for Learning. YCAL is a non-profit organization that works with businesses and schools to provide career education and work based experiences for students and educators in York County. The goal is to help students become successful lifelong learners and to help make informed career decisions.

YCAL has been a champion with the Association in promoting and expanding manufacturing careers to schools and students.

The individual manufacturing and partnership awards were presented by noted oceanographer and explorer Dr. Robert Ballard, the event’s keynote speaker and guest.

The Manufacturers’ Association is the partner and advocate for manufacturing, production and logistics in southcentral Pennsylvania and northcentral Maryland. Founded in 1906 within the strength of the region’s strong industrial roots, today the Association actively works with many types of organizations − offering member benefits such as employee education, training and workforce development, group benefit insurance, professional HR and search services, networking events, and much more.