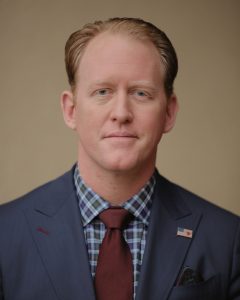 O’Neill is one of the most highly-decorated combat veterans of our time and the author of the New York Times bestselling memoir ‘The Operator: Firing the Shots That Killed Osama bin Laden and My Years as a SEAL Team Warrior.’  A former SEAL Team Six leader, he deployed more than a dozen times and held combat leadership roles in more than 400 combat missions in four different theaters of war. Highly trained, O’Neill led the military’s most elite and was involved in many of our nation’s most important campaigns.

“We at the Association are pleased to welcome Mr. O’Neill to southcentral Pennsylvania,” said Tom Palisin, the Association’s executive director. Having trained more than 800 special operations and tactical operators, O’Neill brings his unique expertise to organizations and translates his elite SEAL team training into high-impact, actionable insights on leadership, decision-making, operating in uncertain environments, and how to become the ‘best of the best.’

“We are, as always, grateful for the support of our regional business community ─ led particularly again by our platinum sponsor, RKL ─ which allows us to underwrite an evening of business networking, awards for outstanding manufacturers, and a fascinating keynote, ‘An Engagement With Rob O’Neill,’  said Palisin.

One of the nation’s most decorated veterans, O’Neill has been decorated more than 52 times with honors, including two Silver Stars, four Bronze Stars with Valor, a Joint Service Commendation Medal with Valor, three Presidential Unit citations, and two Navy/Marine Corps Commendations with Valor.

The evening will also provide a glimpse into O’Neill’s work since leaving the military, as co-founder of Your Grateful Nation, which provides individualized transition support for Special Operations heroes and their families. The organization provides executive-level mentoring, transition services, and family stabilization support.

Seating is limited. Tickets for the event will be $90 per guest, with a discounted rate of $75 for U.S. service veterans and active military. Tickets are on sale NOW, and can be ordered by email at AnnualEvent@mascpa.org, or by phone at (717) 843-3891.

The Association’s annual gathering ─ hosted this year on October 13 at York College of Pennsylvania in York ─ is well-known for bringing together upwards of 750 business and community leaders for an evening of business networking, great cuisine, and the opportunity to recognize outstanding manufacturers from throughout the region for their contributions to business and community during the previous year.

To view the array of event sponsorships available for the 2020 event and Mr. O’Neill’s appearance, please click here!

For further details regarding sponsorships, please contact Tom Palisin or Todd Willman at the Association at (717) 843-3891, or by email at office@mascpa.org.

Our thanks to our Event Platinum Sponsor